Letter from a Caregiver 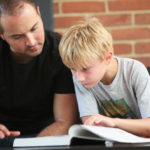 Steven has been matched with his Little Brother, Kalvin, for almost two years now. Kalvin was adopted at the age of two after being pulled from an unsafe, crowded, and abusive group home environment by court ruling and placed with his current family. He was enrolled in the program at the age of 16 with physical, mental and speech challenges. His adoptive mother, who is also an active foster parent, wanted a mentor to help assist Kalvin in social interaction outside of the family and school setting. Since being matched with Steven the two have found a mutual interest in sports. Steven has volunteered on Kalvin’s Special Olympics softball and flag football teams and comes to every game. They regularly like to shoot hoops together and watch basketball and football games on TV. Steven has also volunteered in Kalvin’s school, stopping by to help Kalvin with school work when he can. Kalvin has made vast improvement in the time he has been with Steven. Kalvin regularly uses a speech device in school. Outside of school, and when he was first matched with Steven, Kalvin was embarrassed to carry the device with him. Steven, having a difficult time understanding Kalvin, offered to carry the device for Kalvin on their outings. Steven eventually helped him overcome the anxiety that he felt using the device in public. Kalvin’s mother says that Steven has “the patience of a Saint,” and has done wonderfully with Kalvin. “He is truly a gift from God,” she states.

When Big Brothers Big Sisters asked for a statement from Kalvin about how Steven has helped him over the last few years, I knew it would be short and sweet. Because that is how Kalvin is. He lays his emotions out there, and because of his apraxia, difficult with speech, he tends to make things very brief.

Of course Kalvin loves it that Steven comes and spends time with him. He loves his outings with Steven. Steven has been the best friend that Kalvin really doesn’t have. Having Steven as a Big Brother (BB) has given Kalvin someone he can talk to freely and safely. Their trips to Pizza Hut are his favorite, but I know he also enjoyed being included in Steven’s family at Steven’s mom’s house for a cookout.

Kalvin always calls Steven at least several times per week, and Steven always takes the time to call him back and talk to him on the phone. Talking to Kalvin in person is a challenge enough, talking to him on the phone can be exhausting and frustrating experience, due to Kalvin’s depressed speech.

Being a BB to a cute little eight year old can be a handful, but being a BB to an eighteen year old, with raging hormones, peer pressure, mood swings, apraxia, and impulsiveness, that needs to be spoken to in a developmental range of 12 to 18 on the moment, requires a lot more.

Tears are pouring from my eyes as I finish typing this letter. For someone to take on Kalvin as a LB, yes it is a challenge, but Steven has turned that challenge into a labor of love. You can see the enjoyment on his face when he comes to pick up Kalvin for an outing. I have yet to be able to keep a professional counselor for Kalvin due to his speech issues. They don’t understand him when he talks. But Steven seemed to understand Kalvin, then learned to understand his speech, offering him a place to just forget about his issues for a while, and just hang out with a friend.

But I think Kalvin really sums it up what Steven has done for him very simply. When I asked him, why Steven has been a good BB for him, he squeezed his hands together and smiled a humongous smile, “Because Steven loves me!”