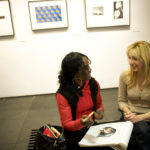 Ben grew up in Mississippi and had just moved to Maryland when he was enrolled in the Big Brothers Big Sisters program. His dad was still living is Mississippi so Ben’s mother felt that her son needed another adult role model in his life. Also, since Ben was only thirteen and his mom was a disabled Veteran, she felt that he needed someone who could do active things with him and help him explore the area.

When he was enrolled in the program, Ben had self-esteem issues and was a little shy. However, when meeting his case manager for the first time he expressed his excitement to have a mentor. He didn’t care who his Big Brother was as long as he was active. He would even consider a Big Sister if they felt the match was right!

Nikki was a sophomore at a local college who was physically active and also interested in exploring the area. As an early education major with an emphasis in outdoor education and a spot on an Intramural soccer team, she was excited to mentor a child and share her interests.

When Nikki and Ben were introduced, it was an instant connection. They immediately took to each other as if they had known each other for years. At the end of the match meeting they decided not to wait to spend time together, and went out immediately afterwards to begin to get to know each other better. With a shared love for soccer, their relationship continued to grow and there was no denying that this friendship would last long past Nikki’s tenure in Salisbury.

When it was time for Nikki to graduate and move on, Ben had become more comfortable in his school and the community. His grades were excellent, his self-esteem had improved, and he was really “coming into his own” according to his mom. He had even given chorus a try that year. Nikki and Ben set up a plan to keep in contact through e-mail. Nikki has been back to town to visit her Little Brother since moving away. While this match was only officially with BBBS for four years, their relationship continues to thrive and is still going strong today!