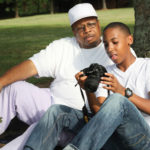 Brad is a child in the Big Brothers Big Sisters program. When he enrolled in the program, he was homeless and living in a shelter with his mother and sister. His mother has a crippling disability and his father had not been a part of his life for years. Brad asked Big Brothers Big Sisters to grant him a mentor who would play sports with him and provide him with an opportunity to escape from his shelter life for a few hours every so often. About five months ago, he was matched with a mentor, Noah, who was able to do just what Brad had requested. Noah saw his mentee once a week and took him all over town to play sports, ride bikes, swim and go out to eat. Brad could not believe how lucky he was to have a mentor like Noah. A real bond formed between the two and they began to see each other more as family than friends. Unfortunately, Brad was court ordered to go live with a relative in another part of the state. However, their bond was so strong and the match was so important to both of them that Noah wanted to continue supporting Brad in any way that he could. Even though it is not feasible for Noah to see Brad every weekend as he did before, the mentor still calls and talks to Brad on the phone as a form of support. Noah is also making plans to travel to go see Brad just to keep their bond alive.

This is a prime example of how important a match can be to a child. It is matches like these that are motivating because their relationship is really like that of brothers. The match did not expire just because the child moved away, but instead it is still flourishing. Noah is still able to provide his mentee with a support system that he did not have prior to the match.